Splitting Seeds is one of Lumosity’s most deceptively simple games: you’re tasked with dividing seeds equally between two birds, but because the game is timed and your score depends on speed, you can’t count the number of seeds out. Instead, you must quickly visually estimate the seeds and divide them accordingly.

When we conceived of Splitting Seeds, we were interested in designing a new game that involved subitizing. Subitizing is the ability “to perceive at a glance the number of items presented.” Lumosity Research Scientist Aaron describes the process as “somewhere between counting and estimating, a type of automatic counting,” while the Open School Network provides one illustrative example of subitizing in daily life: “Subitizing is what tells you what number you roll on a six sided dice – most adults no longer have to count the pips after playing board games for a while.”

Splitting Seeds is actually Lumosity’s second game involving subitizing. Previously, we had a similar game called “Space Junk,” where players had to quickly discern the number of satellites that flashed on a screen. In listening to user feedback and through our research, though, we believed there was room for improvement. Research Scientist Aaron explained, “In Space Junk, we didn’t limit the number of items to be subitized. There’s some debate in the research community about what our natural capacity for subitizing is, but generally it gets much harder after seven items, so at higher levels, Space Junk just became about guessing rather than actually doing the task at hand.”

When developing Splitting Seeds, then, the team took the seven item limit into account. They also worked to ensure that players couldn’t fall back on guessing or clicking at random rather than subitizing and estimating. For instance, the stick players must rotate to divide the seeds changes position with each new trial. The team also developed an algorithm so that in each trial there is only one position to place the stick correctly.

“Because the game is pretty simple, we were able to add a lot of polish to make it a better experience than our original subitizing game,” said Sarah, the Game Artist who worked on Splitting Seeds.

Sarah worked on a variety of different art concepts during the game’s development. Some of these included a bento box in which players had to divide sushi and a night sky lit up with fireflies. Ultimately, her birds-and-seeds concept won over the team. 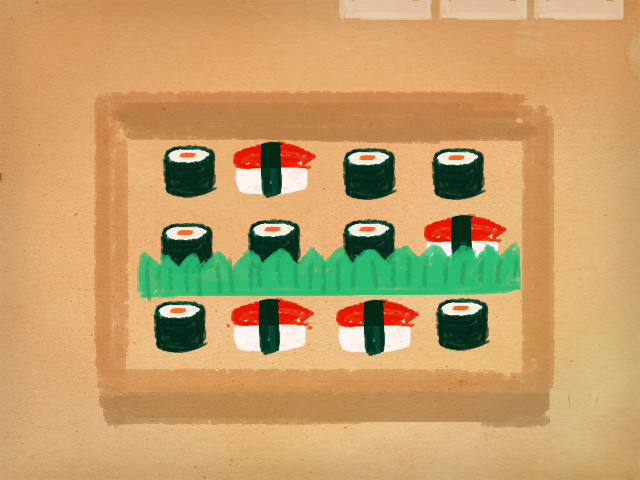 “As with all our games, we wanted the art to help make the task easily understandable at first glance,” she explained. “With Splitting Seeds, you have two birds, seeds, and a stick, so the game’s narrative — dividing seeds equally between two birds — is contextualized right off the bat by the art.”

Naming Splitting Seeds was a bit more contentious. Other names the team considered included Seed Share, Eat Like a Bird, Spring Feeding, Stick It To Em, A Seedy Affair, and Birds of Avarice (a play on “birds of paradise”). But much like the game art helps reinforce the game’s central task, Splitting Seeds seemed to best capture the essence of the game.