The Science Behind Train of Thought

Every Lumosity game starts with research. Some of our games are directly inspired by classic neuropsychology tasks. For instance, Lost in Migration is based on the Flanker Task. Other games are our own invention, but these too start with a thorough review of existing research so we can understand the cognitive ability we want each game to challenge. Train of Thought is one such game: technically our own invention, but still deeply rooted in fundamental cognitive principles.

Funnily enough, Train of Thought actually came about because we were trying to develop a new problem solving game involving planning. We were interested in devising a game that would mimic real-world planning, and our initial research began with investigating the Tower of Hanoi. The Tower of Hanoi is a puzzle frequently used in research to evaluate problem solving: it typically starts with three rods, the first of which has a stack of rings, one on top of the other, and the rings are ordered by size with the biggest on the bottom and the smallest on top. The object of the puzzle is to move all the disks to one of the other rods, one at a time, but you’re never allowed to place a bigger disk on top of a smaller disk. So, how do you plan ahead and use all the rods to recreate the original stack of rings on the designated rod? 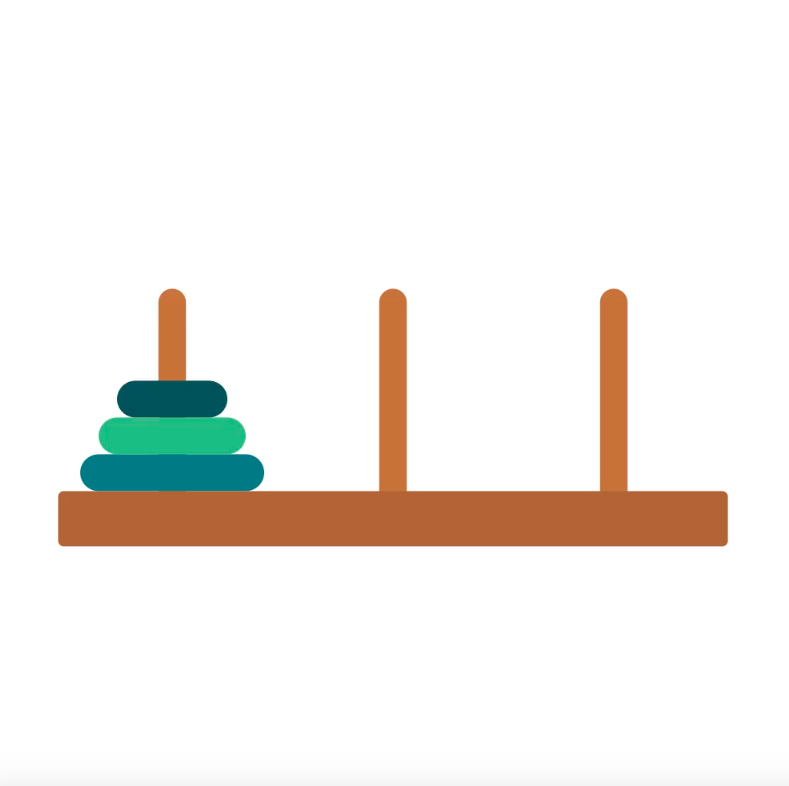 The Tower of Hanoi asks: can you restack these rings on the last pole, moving one ring at a time, but without ever stacking a bigger ring on top of a smaller ring?

What we liked about the Tower of Hanoi was the idea of a game in which you have a number of dependent tasks to deal with — or tasks that you can’t complete until you’ve completed other tasks first — but we wanted to frame this in a more relatable activity. One early prototype used suitcases on a conveyor belt to try to gamify real-time planning. At the same time, we’d reviewed some research that suggested that continuous, asynchronous tasks make for good training, and the suitcase prototype did a good job of capturing this. As the game thus took shape, and we transitioned from suitcases to our now-beloved trains, it became clear that, while the game definitely required planning, even more essential to playing the game was multiple object tracking: you have to pay attention to the whole screen, not just one train at a time. As a result, we reframed the new Train of Thought not as a problem solving game but as an attention game, specifically divided attention. Divided attention refers to the ability to simultaneously respond to multiple tasks or task demands.

Of course, planning ahead is still important to success in Train of Thought, especially at higher levels. We found that a lot of people seemed to get stuck around Level 8 and plateau. Investigating further, it became clear that it’s around that level, when the number and speed of trains increases dramatically, that planning is critical. That’s why we devised a Train of Thought “planning score” — to help players better understand how they can work on planning ahead to master more difficult levels. If you’re a Lumosity subscriber, you can find your planning score in the new Train of Thought Insight, available on web, iOS, and Android. Happy conducting!